by MDSSAdmin
I want to personally thank MDSS user “SeaBass” for funding me for this trip. It was very generous and I’m grateful that I didn’t need to worry about the money and could instead just focus on helping those I was going to meet in NOLA! This past spring I decided to accompany a group of... Read More

I want to personally thank MDSS user “SeaBass” for funding me for this trip. It was very generous and I’m grateful that I didn’t need to worry about the money and could instead just focus on helping those I was going to meet in NOLA!

This past spring I decided to accompany a group of VJC students to New Orleans, Louisiana to spend our spring break week helping in the community devastated by Hurricane Katrina in 2005. While most college students are spending this time at sunny beaches or just relaxing and taking it easy, we spent a week doing labor and getting dirty. I will admit, I wasn’t really looking forward to the work or the fact that I wouldn’t be able to sleep in everyday and then go get paid at work. On the other hand, I was excited to go on a road trip to a place I had never been and be able to help people all while hanging out with my friends.

Our mission was to work with Campus Crusade for Christ who was stationed in NOLA since soon after Katrina hit in 2005. College groups come down and CCC organizes where they will work for the week. They also hold nightly meetings with the groups and sponsor fellowship. Our group from VJC was split up for the workdays. My group basically did 3 different jobs. We worked with a group/staffing organization called Acorn. We also worked with a group of volunteers called “Common Ground”. They were stationed right in the heart of the Lower 9th Ward – in fact right in front of where a levy was breeched by a barge which flooded the 9th Ward and the area that received much of the media coverage. 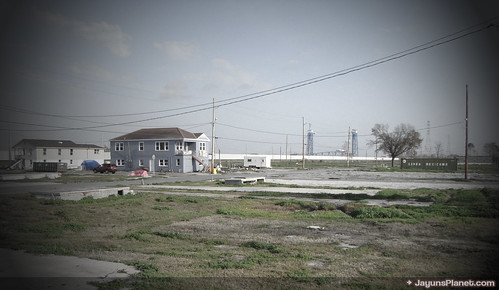 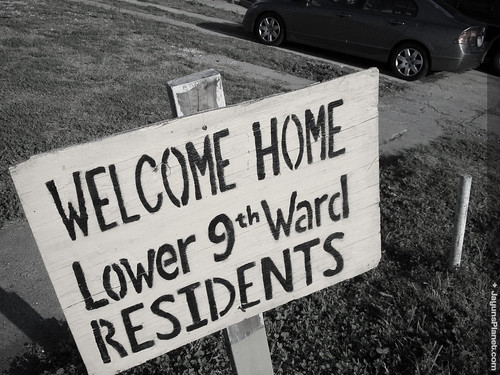 With Common Ground we worked at the Louisiana Nature Center. This center had a huge forest that was complete devastated by the nasty waters that got dumped all over NOLA during Hurricane Katrina. An invasive species of plants called “Chinese tallow” had overtaken the forest (and much of the Southern Gulf Coastal plains.) As long as these plants were allowed to grow, nothing else would grow in the forest area. So they needed to remove these species. They look like wooden bamboo sticks. We also were able to plant some trees for future growth. We also went down to the Lower 9th Ward and worked on a community garden at the Common Ground house that sits right in front of where a barge breeched a levy. This was a great group bonding we had because the entire VJC group eventually got together to work on this. 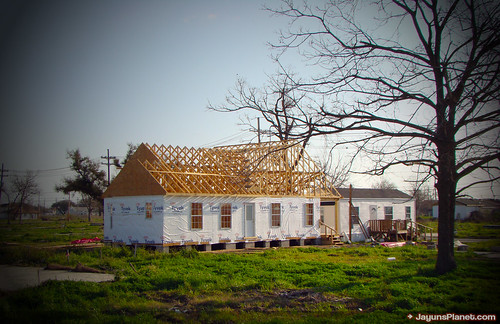 With Acorn we worked on an older woman’s house that was gutted as a result of Hurricane damage. The entire VJC group worked together to strip door frame and window moldings and scrap off any junk. We then primered everything door frame and window frame. We also cleaned out the junk from underneath her house. It was a pretty relaxed 2 days. We could have done more, but there was no direction so we just all hung out.

My group spent some time at a place where old Christmas trees are dumped – to resuse AFTER Christmas! New Orleans residents move their Christmas trees from their living rooms after Christmas to their front porches and leave them there until Mardi Gras. Mari Gras had just ended by the time we got there. So, that brings us to the Christmas tree dump. To the New Orleans naturalists, these trees are a godsend. We stacked the trees into piles throughout the area. Later on, the US Coast Guard will come in with helicopters and pick up the bundle of trees and deposit them into sections of the Mississippi River and other watersheds to rebuild the coastline that was extremely damaged by Hurricane Katrina. 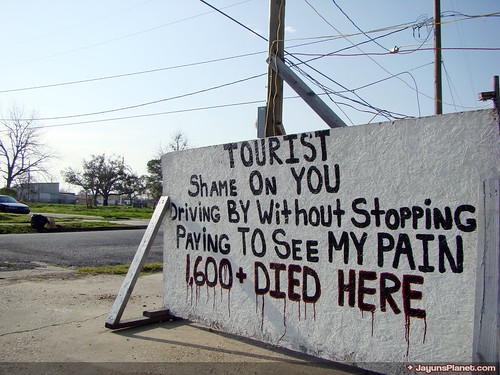 Admittedly, I feel as though we didn’t accomplish enough to warrant a trip like this. I feel that the organization(s) we worked with simply weren’t organized enough to provide us with valuable working experience to help others. There is a TON of work to be done down in New Orleans and the Gulf Coast, but at this point, it’s more necessary to have skilled laborers. The months after Katrina, New Orleans saw thousands of volunteers coming down from across the country to help out. At that point in time, volunteers were needed to do the dirty work of clearing out homes – anyone could do that. Now, it’s time to rebuild, and you need construction workers who are skilled and licensed to do such work. On the other hand, we were thanked tremendously by numerous people while we were down there. They saw the effort we made and they appreciated any and all help no matter how small we thought it was. One woman even paid for our entire group’s dinner one night! 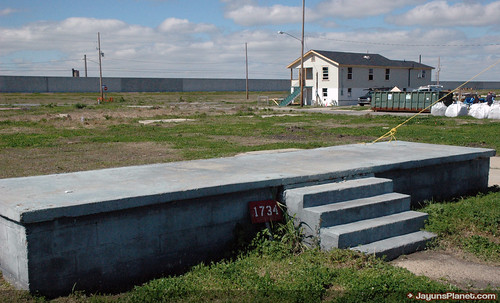